Carl Crawford Slams Megan Thee Stallion's Claims That His Label Is Preventing Her From Dropping Music, Also Claims She Owes Him Near $2 Million

Idris Elba's Wife Sabrina Dhowre-Elba Has Now Tested Positive For The Coronavirus: “I Wanted To Be With Him”

Groupies, Future And Drakeee?! Princess Love Is Spilling All The Tea

Rasheeda Is Tired Of The Criticism That Kirk Receives: "Y’all Couldn’t Wear My Shoes Or Be Married For 5 Minutes"

50 Cent To Grill Rick Ross In $32 Million Court Battle Over Baby Mama’s Sex Tape Leak: "Ross Had A Role In It"

Fetty Wap Found Guilty Of Defaming Ex-Employee; Ordered To Pay $1.1 Million: "He Told Everyone That I Stole From Him"

Tom Hanks Has Tested Positive For The Coronavirus 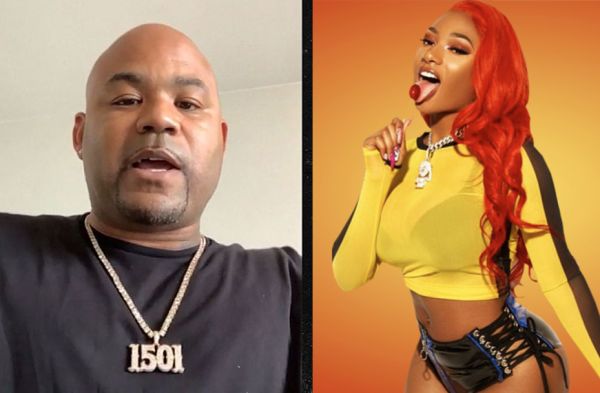 Neighbors, the tea is hot! It’s no secret that Megan Thee Stallion and her label 1501 haven’t been seeing eye to eye and it doesn’t look like things will be getting better any time soon. Carl sat down with Billboard and denied ANY claims of him or his label trying to prevent Megan from putting music out.

“It’s a whole lie,” says Crawford. “Nothing is true that she said. Me being greedy and taking money from her, that’s crazy. I never tried to take nothing from her. The only thing we ever did was give, give, give.”

He really went into detail about what his initial reaction was after seeing Megan on Instagram Live accusing his label of preventing her from dropping new music.

My initial reaction was, “Man, I can’t believe this is serious.” She just has so many holes in her story, and it’s almost on some delusional type stuff. The bubble of Hollywood and her eight million followers has really clouded her head, because the stuff that she’s saying is not true. It’s a whole lie. Nothing is true that she said. Me being greedy and taking money from her, that’s crazy. I never tried to take nothing from her. The only thing we ever did was give, give, give. Now, she fell for the oldest trick in the industry: the conquer and divide theme.

Everybody in the industry knows this is what Jay-Z and Roc Nation do: They come in, the find the smallest things wrong with the problem — because there weren’t any problems before she left — and then she says that I didn’t want to negotiate? Ok, tell everybody your definition of negotiating. Your definition is, “OK. I’m going to send Suge Knight’s old lawyers to come in, and it’s a stick-up…'” Of course, I’m like, “This isn’t a negotiation. This is a robbery.”

They want to make it look like I’m greedy? No, they’re trying to keep me out of everything. She keeps saying, ‘Them n—as over there negotiated my contract.’ Them n—as are sitting right next to her. T. Farris is the one. Her mom did the contract. I’m new to the business. I let this guy T. Farris run my whole business, because I knew absolutely nothing about it. Zero. So he wrote your contract up. I didn’t do it.

They want to make a big deal about it. We signed a deal. Honor your contract and let’s just keep doing business how we been doing and everything is fine. Nobody is trying to rob you.

He was also asked about last time you spoke he spoke to Megan and if the relationship can be salvaged outside of court.

“I don’t know at this point, because it’s so bad. I don’t know what can happen. Right now, I’m just trying to make sure that fair is fair. I just want it to be fair. Nobody wanted to stop her music. I understand that, but she’s ignored me since August. I haven’t spoke to her since August, and this is what’s going on. She hasn’t tried to do nothing. She hasn’t made one payment since August. You do the math and see how many months that is and add it up. Anybody would be pissed off.

You owe me money that I recouped, and you owe me show money. You owe me d–n near $2 million. You d–n near in the hole for $2 million, and you want to just get up out of it because Roc Nation told you you could.